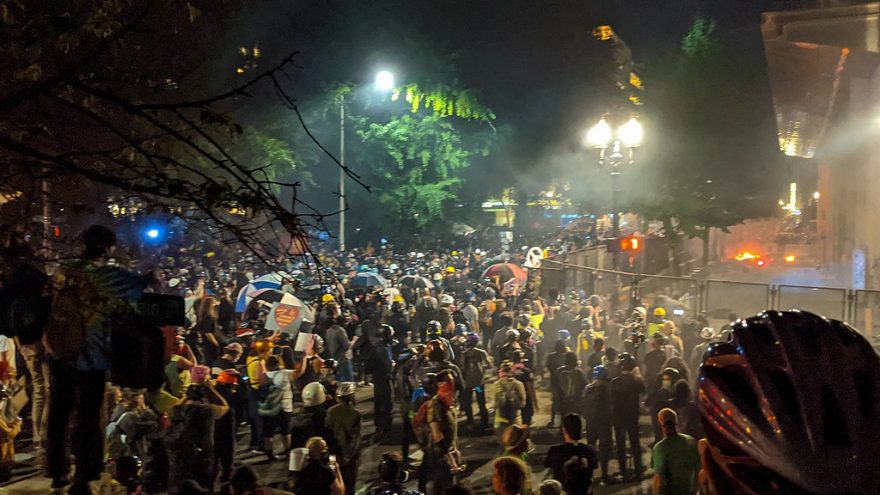 Another night of violence in Portland, Oregon.

Prior to the nightly riots in front of the federal courthouse, a woman was filming in Lownsdale Square Park, a park that has been home to protests since they began.

That, apparently, didn’t sit well with a few of the protesters.

The woman who was stabbed has a tattoo that Red State says is an Antifa tattoo.

Then the protesters start following the woman as she's trying to leave and, amazingly, one of the first things they yell is "Call the police!". They keep telling the woman to drop the knife but she, wisely, does not. No doubt she was outnumbered.

Police showed up to a hostile crowd:

During the initial response, officers encountered a hostile crowd and additional police resources were summoned to try to conduct an investigation. Officers initially located the knife used in the stabbing, however as the officers were trying to secure a crime scene someone picked it up and ran off with it. Officers were unable to safely conduct an investigation due to the hostile crowd, and supervisors made the decision to disengage. As the knife is evidence, it should be returned to police custody.

According to the New York Post, police showed up but were met with hostility and unable to continue their investigation. They were able to interview the suspect and, as of now, no arrests have been made.

A protester was stabbed near the federal courthouse earlier today.

PPB says no arrests have been made at this time. pic.twitter.com/zHCX76KeJ5