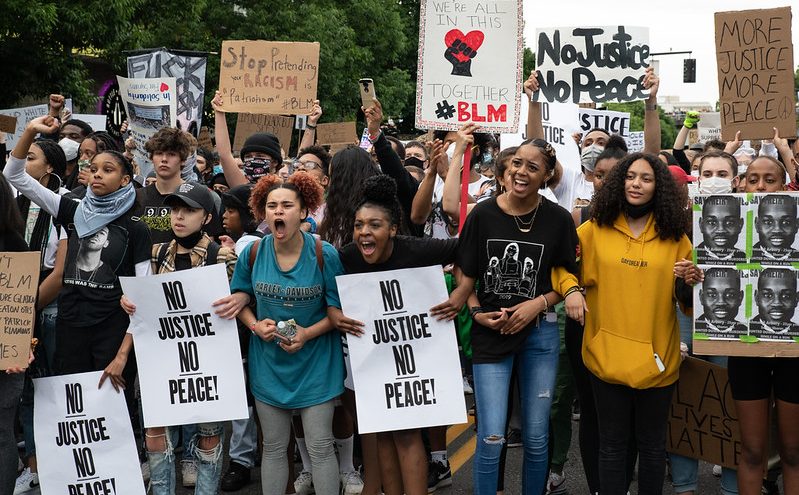 
On July 7, 2016 Michael Strickland was at a Black Lives Matter rally, covering the protest as an investigative journalist. Strickland had started to make a living by filming and covering political protests and issues in the local area of Portland, OR.

He was selling some of his videos to networks like Fox News, MSNBC, and local broadcasters.

But things got a little more dangerous than he expected and he was surrounded by a group of hooded BLM activists who started yelling at him to “Get the F$%k outta here” and calling him a racist.

Strickland walks through a few videos that were taken of the incident and explaining what is going on and what is going through his head at the time of the likely impending attack.

A mob of people started to surround him and he says pushing him. He starts retreating. They kept following. Eventually, as the mob grows bigger and louder, he notices one of the guys broke away and came around his blind side.

That's when he decides to pull his legally owned and licensed to carry firearm.

Strickland does not fire and quickly re-holsters his firearm as they back off.

Police show up, and arrest him. He is then convicted of 21 criminal acts, including 10 felonies. His own video was ordered sealed by the judge and much of the exculpatory evidence, Strickland says, was deemed inadmissible in court.

He says the Oregon Firearms Federation has helped him and his case is on its way to the SCOTUS but the NRA has been silent.

Regarding the 1st Amendment: Does a person have the right to be in public area, filming a public event, as part of their job, and in exercise of their right to free press? Or does a gang of thugs have the legal right and lawful authority to use force, threats, and intimidation to prevent a person from engaging in their 1st Amendment rights? If the gang of thugs does not have that right, then they used unlawful force against me, thus meeting the threshold for exercising self defense.

The 2nd Amendment ramifications are obvious. Can a person draw their firearm in self defense against a mob that the person believes is engaging in unlawful force, potentially deadly force, and further imminent unlawful force? Given the number of assailants against me and the fact that I am partially disabled, a large disparity of force was presented. Additionally, I used verbal commands, a non lethal alternative, and was attempting to retreat to avoid the conflict, all to no avail, as the mob continued to bear down and pursue me. I followed the training I had received from the numerous firearms courses I had taken over the years.

What would you do? Do you think his actions were justified in drawing his weapon? Should they be?

21 thoughts on “What Would You Do in This Situation? This Man is Now a Felon”