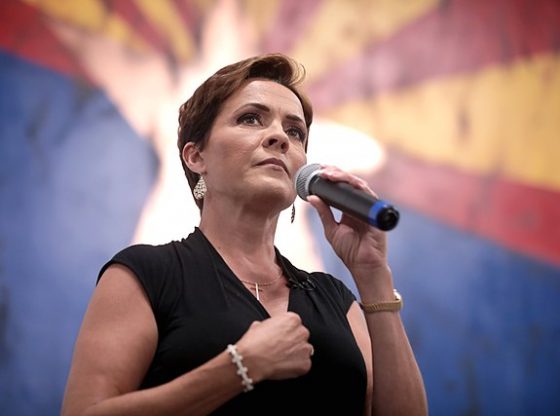 
Fentanyl overdoses are on the rise and killing thousands of lives. It is especially targeted to young adults 18-45. Just a single granule the size of a grain of salt can kill you. These drugs come primarily from Mexican cartels into our southern states due to Biden’s open border policies. China sends the drugs to Mexico where the cartels cook it up and send it across the border into our country. Fentanyl is how China, and the Mexican cartels are acting in forms of terrorism against our country. And this terrorism comes at the hands of Biden and Kamala. They have blood on their hands.

With the help of the Chinese Communist Party (CCP), the Mexican Cartels are raging war in the streets of their own country, just minutes from our borders. They are now raging war on the United States.

On Day 1 as Governor of Arizona, Kari Lake will blow up the drug tunnels and declare an invasion on our border. Support Kari Lake’s plan to SAVE AMERICA here: LINK

In 2019, President Trump threatened to designate these Mexican cartels as terrorists in order to put pressure on the Mexican president. But the Mexican president isn’t threatened by Biden like he was of President Trump. Drug smuggling went down under Trump. But under Biden, they are flourishing. State and local governments are left to fend for themselves. Arizona is Ground Zero.

Kari Lake, the gubernatorial candidate for Arizona has a plan; and its aggressive. Her state will take back control of the border with Article 1, Section 10 in the United States Constitution. This is the remedy for the federal government refusing to help states such as Arizona. On day one of Kari Lake’s time in office, Arizona will declare an invasion on their border and call in the National Guard. Other state governors have agreed to help. Under Kari Lake’s direction, they will defend their state from the CCP and the Mexican cartels who are committing acts of terrorism against our country. In an interview with Jesse Waters on Fox News yesterday, Kari Lake said that she would be “damned if they use Arizona” to bring down our country.

During the interview, Kari Lake reminded viewers of the history lessons that taught how dynasties were brought to their knees during the opium wars. Kari Lake stands in the way of the CCP and Mexican cartels trying to repeat history. Kari Lake will not allow this country to be brought to its knees.