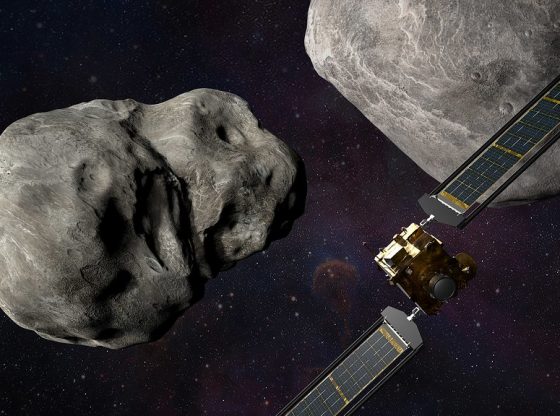 
In late September, NASA launched DART to crash into an asteroid that would threaten Earth with its impact. This was an intentional crash, a suicide mission for the small spacecraft that was the size of a large vending machine. It took some time for the data to come back to Earth, but NASA has announced that the DART Mission exceeded their expectations.

The target of the ‘Double Asteroid Redirection Test’ flight – or DART – was an egg-shaped asteroid named Dimorphos, roughly the size of a football stadium. It was orbiting a larger, parent asteroid called Didymos once every 11 hours and 55 minutes.

The aim was to fly the DART impactor vehicle – no bigger than a vending machine – directly into Dimorphos at about 14,000 miles closer to its larger companion.

NELSON: “And now the team has confirmed that the spacecraft’s impact altered Dimorphos orbit around Didymos by 32 minutes and therefore, successfully moved its trajectory. In other words, DART shortened the 11-hour and 55-minute orbit to 11 hours and 23 minutes, and it moved it in another location. And that has been confirmed by the telescopes.”

Although NASA stressed the two asteroids, nor DART, posed any threat to earth.

But measuring the orbital change is just the first step towards understanding the effect of the DART impact on the asteroid. The focus will now shift towards measuring how efficiently the spacecraft transferred its momentum to the asteroid. Scientists will have to further analyse the tons of asteroidal rock that was displaced by the impact.

According to NASA, DART’s push of Dimorphos was made more efficient by the recoil from the sudden blast of debris leaving the asteroid, like how the jet streaming from a balloon sends it racing in one direction. The debris that left the asteroid has formed a trail over 10,000 kilometres long.

Astronomers study the final images taken by the DART spacecraft for further analysis. They will also use images from the LICIACube CubeSat. Further, the European Space Agency’s Hera project will conduct more detailed surveys of both Didymos and Dimorphos in the next four years, while focusing on the crater left by DART. It will also look to get a precise measurement of Dimorphos’ mass.