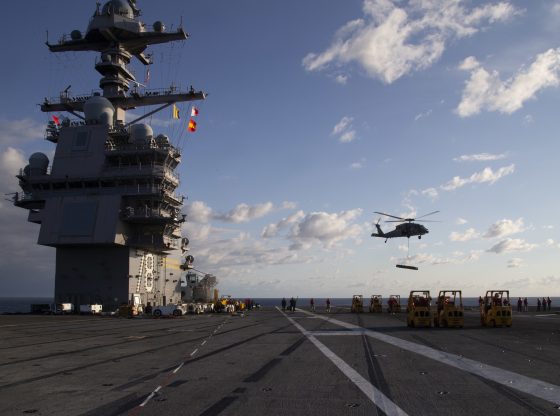 
On October 4, the USS Gerald R. Ford departed Norfolk, Virginia, for a trip across the Atlantic. The ship is the first of the Ford-class aircraft carriers, nuclear-powered hangars-and-runways that serve as the centerpiece of the US Navy’s fleets and, as such, project American military might all across the globe. While the Ford has already sailed on sea trials, this will be its first deployment as an operational part of the Navy. For this mission, the Ford will include at least one foreign port of call, but the journey itself is set to be a shorter voyage than a typical carrier deployment.

The Ford’s construction began in 2009, and it was formally commissioned in 2017. In 2008, when funding for the Ford was approved, it cost $13.3 billion. The ship was first declared operational in December 2021, though it suffered delays as work on technical problems, like weapons elevators, was still needed before it could properly set sail.

The Ford is the eleventh aircraft carrier presently in the fleet to enter active service, and it’s the first of the new design. The previous Nimitz-class carriers first entered service in 1975, with the most recent of that class joining in 2009. Eleven carriers is a lot, more than that of any other nation, though it’s also the minimum allowed by Congress. It’s a number that also does not include the Navy’s amphibious assault ships, in both Wasp and America classes, which have flight decks and are comparable in size to the aircraft carriers of other nations.

The Ford borrows a hull design from the Nimitz class, though it is somewhat modified. Internally, the carrier is redesigned to maximize both its utility and minimize long-term costs. This includes, most notably, the Electromagnetic Aircraft Launch System (EMALS), which replaces the steam catapults on earlier carriers. Steam catapults help planes get up to speed when taking off from the short carrier runways, pulling a cable that helps hurl the plane as it accelerates to flight. EMALS replaces the steam buildup and launch of the previous system for an electromagnetic rail, which can be reset and reused more quickly.
When you sign up to comment you'll also receive our regular newsletter. You can find more about how we use your information here.