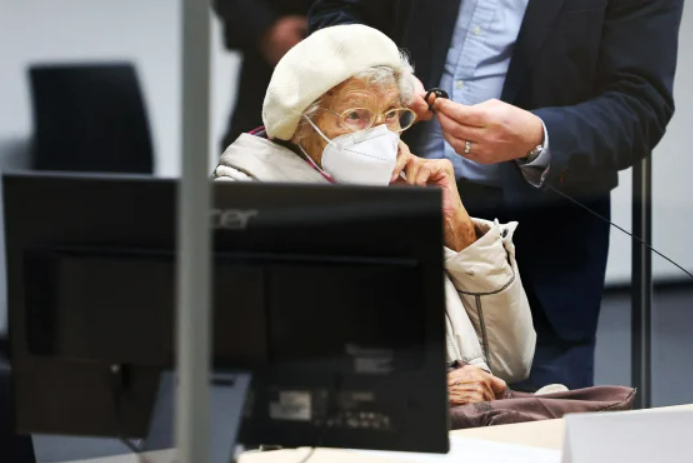 
Earlier this month, Irmgard Furchner was convicted of 10,505 murders that took place at a Nazi death camp during World War II. She was the secretary to the commander of the Nazi’s Stutthof Concentration Camp.

The History
On September 30, 2021, NBC News reported that Irmgard Furchner took a taxi and “went on the run” to escape the first day of her trial that would convict her of aiding in the murders of over 10,000 individuals at a Nazi death camp. Given the women’s age and condition, she was not expected “actively to evade the trial.” She left her place of residence, a home for elderly people, and took a taxi to a train station close to the Danish border where she was arrested.

A typist in WWII, Irmgard Furchner was 18-years-old when she began working for the Nazi’s. According to Stutthoff museum’s website, about 65,000 people – including many Jews – were murdered at Stutthof Concentration Camp. These murders took place from 1943-1945, when Irmgard Furchner was a typist.

The Elderly – Arrested
Recently, more and more elderly people are being arrested for the parts they played with the Nazi’s during World War II. NBC reports the following list of such elderly that have been arrested for war crimes.

Bruno D. was convicted last year, at 93, of abetting the murder of 5,230 people as a guard at Stutthof. He was also tried in a youth court despite his age because he was still a juvenile at the time of the crimes.

Oskar Groening, known as the “accountant of Auschwitz” for his job recording valuables seized from deportees on their arrival at the extermination camp, was sentenced to four years in 2016 for accessory to murder, although he died before his sentence could start.

The Trial
NBC reports that in a Dec. 20 verdict, the Itzehoe state court gave Irmgard Furchner a two-year suspended sentence for being an accessory to murder in 10,505 cases and an accessory to attempted murder in five cases.

Both the defense attorney and a lawyer for the co-plaintiff filed appeals with the Federal Court of Justice.

Defense lawyers had sought Furchner’s acquittal, arguing that the evidence hadn’t shown beyond doubt that she knew about the systematic killings at the Stutthof camp, meaning there was no proof of intent as required for criminal liability.

But presiding Judge Dominik Gross said as he announced the verdict that it was “simply beyond all imagination” that Furchner didn’t notice the killings at Stutthof.

Furchner was tried in juvenile court because she was 18 and 19 when the alleged crimes were committed and the court couldn’t establish beyond a doubt her “maturity of mind” at the time.

It is not clear whether or not the Court will consider the appeal. This story is developing.