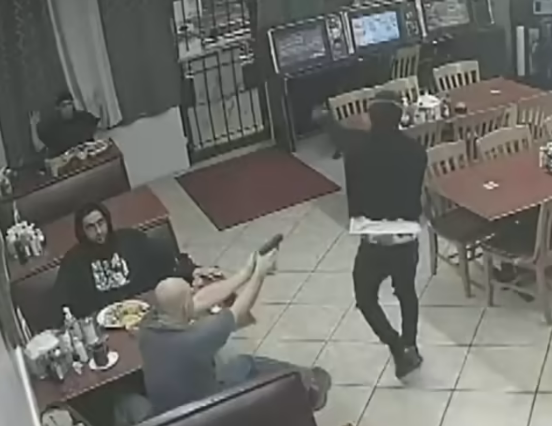 
Don’t mess with Texas. At least that’s what an armed robber found out after being shot dead while robbing a Houston area taqueria. About 10 customers were eating inside The Ranchito #4 when the masked robber walked in and pointed a gun at them as he began taking their wallets and cellphones.

In surveillance footage which has gone viral on social media, a middle aged male customer can be seen pulling a pistol on the robber as he turned to leave. The armed customer stood up and shot him several times and the suspect died at the scene, according to police. Watch the video here (Warning Graphic).

Police released photos of the man they believe shot the suspect and his vehicle. the Houston Police said the man is not charged at this time, but he is wanted for questioning.

Many people on twitter and social media believe the customer does have some questions to answer though. Some felt as though it was not necessary for the customer to continue shooting after the thief had fallen to the ground after the first couple of shots. The customer fired 9 shots in total after the robber seemed to be incapacitated after only 4.

But Texas lawyers are saying differently, as former HPD officer, now lawyer, Thomas Nixon says, “The person he shot was in the process of committing robbery and consequently his use of force in defense of himself and innocent third parties is completely justified in Texas.” Nixon said the shooter had no obligation to stay at the scene and explain himself since he didn’t commit a crime.